Francis is a made up of a merry bunch of souls from Sweden whose debut album Lekomberg, We Were Kin was released last summer, shortly after the band played in Amsterdam supporting The Tallest Man on Earth (photos here if you’d like to see). We at Nordic Vibes are happy that Francis is back with a headlining tour and new EP.

New EP streaming on JaJaJa!
The EP is entitled This Must Be Blood and will be released on Monday 27 February via Stangers Candy/Playground. The second track from this EP ‘Traktor‘ was already released as a single last month and is included here for your listening pleasure:

You might also be pleased to hear that if you hop on over to the website of the lovely Ja Ja Ja Music you can currently stream all four tracks from the EP right now here.

Tour
Next week, Francis heads out on a headlining European tour which includes one Belgian and three Dutch dates in all, culminating with a gig in Paradiso, Amsterdam. 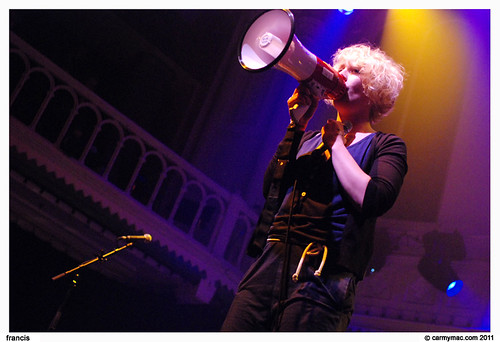 Photo of the last time Francis played in Amsterdam (May 2011)